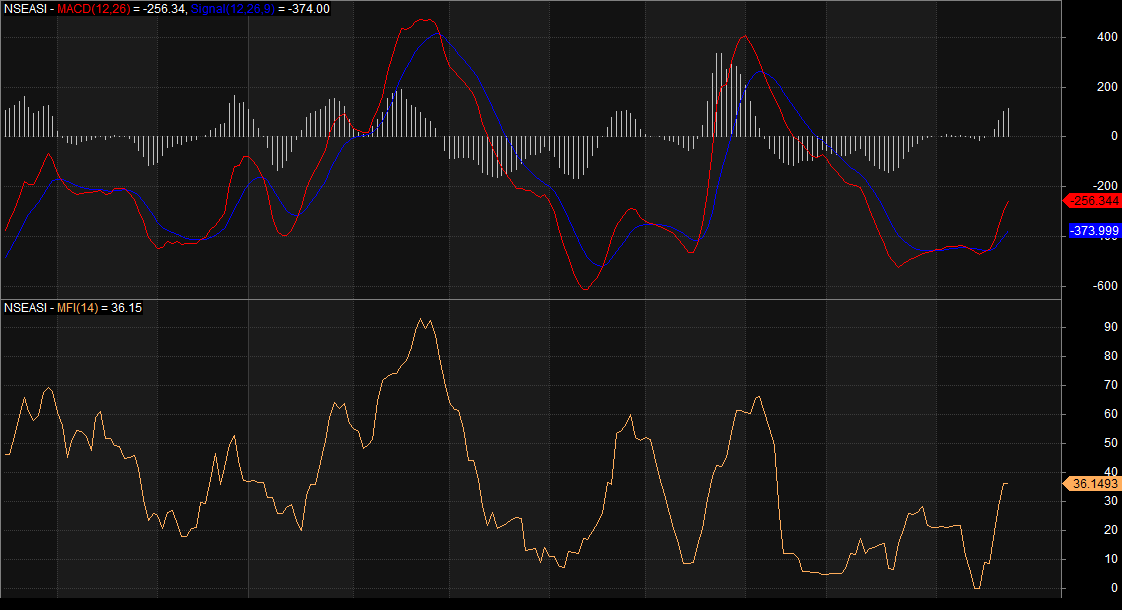 Post Views: 403 Market Update for August 26 The last full trading week of the month of August on the Nigerian Stock Exchange (NSE) which started Monda...

Investors’ Worth On NGSE Soars By N1.17tr, As All-Share Index Recovers 9.76% In May
Corporate Actions On NGSE As Of April 3, 2020
FMDQ Gets SEC Nod, Becomes Full-fledged Securities Exchange
Post Views: 403

Market Update for August 26
The last full trading week of the month of August on the Nigerian Stock Exchange (NSE) which started Monday was yet another mixed session on a negative note, signaling a failed bear rally. This was, however, earlier foreshadowed on Friday, when the market’s gaining momentum witnessed a slowdown, with a Monday’s volume traded declining sharply on mixed sentiments. A confirmation of this failed rebound will, however, depend on today’s market forces, because the intraday low is yet to be undercut.
Rebound or recovery is said to sustain when the composite index follows through on four or more days after a rally attempt. The first two or three days of the rally are normally disregarded, given that its success has not yet been proven to follow through with power and conviction. A follow-through day occurs when at least one of the major indexes makes a large percentage gain on higher volume traded which should generally be in the region of 2% or more. All days of the rally do not need to be up, some may be down, however the low of the most current rally must not be under-cut, or the rally would be considered a failure.
Of course, the stock market remains an important barometer of economic sentiment. In that regard, the week started on a cautious trading note with what seems to be a wait-and-see for what the economic policies and direction of the new Federal Executive Council (FEC) will be, just as reflected in the low traded volume.
Meanwhile, the composite NSE All-Share index opened Monday’s trading on a slight upside in the morning, an extension of the bear rally but pulled back in the midmorning to early afternoon, touching the session’s low of 27,664.57 basis points from a high of 27,851.37bps. This was a key resistance before the index retraced up marginally to close negative at 27,691.85bps.
Market technicals for the day were negative and mixed as volume traded was lower than the previous day’s, in the midst of negative breadth and selling pressure, as revealed by Investdata’s Daily Sentiment Report, showing ‘sell’ volume at 85% and a ‘buy’ position of 15% on total daily transaction volume index of 0.74.
The momentum behind the day’s performance remained weak and flat as Money Flow Index read 36.15 points, up from the previous session’s 36.12bps, an indication that funds left some stocks without new positioning. This was just as buying interest slowed down ahead of data such as the Q2 GDP report from the National Bureau of Statistics (NBS) expected to confirm the state of the economy.

Index and Market Cap
At the end of Monday’s trading, the NSEASI shed 108.30bps, closing at 27,691.85 bps, after opening at 27,800.17bps, representing a 0.39% decline, just as market capitalization lost N52.41bn to close at N13.39tr, from an opening value of N13.52tr, representing 0.39% loss.
Attention: If you have not signed up for Investdata buy and sell signal setup, don’t delay. We have just added another risk management feature and new stocks of most revered traders and investors in corporate Nigeria to our watchlist. These stocks are with double potentials. To become a member, send ‘YES’ or ‘STOCKS’ to the phone numbers below. Take advantage of this service to buy right and sell right during this post Q2 earnings reports portfolio reshuffling and repositioning ahead of fiscal and monetary policy catalysts.
The day’s downturn resulted from profit-taking and selloffs in stocks like Seplat, Forte Oil, Julius Berger, Oando, Ecobank Transnational Incorporated, International Brewery, CCNN, UACN, Access Bank, and NB, among others. These lose impacted negatively on the NSE’s Year-to-Date loss, raising it to 11.73%, just as YTD market capitalization gain dropped to N1.73tr or 15.43% from the year’s opening level of N11.72tr.

Bearish Sector Indices
All sectoral performance indexes closed lower, with NSE Oil/Gas index leading the decliners, after shedding 6.78%. It was followed by the Industrial Goods index with 0.99%, while Insurance, Consumer Goods and Banking indices lost 0.66%, 0.39% and 0.23% respectively.
Market breadth turned negative as decliners outnumbered advancers in the ratio of 20:19; just as market traded volume and value fell by 53.40% and 42.11% respectively to 158.27m shares worth N2.32bn, from the previous day’s 335.61m units valued at N3.52bn. Volume for the day was driven by trades in financial services and conglomerate stocks like Transcorp Plc, Zenith Bank, UBA, FBNH and Guaranty Trust Bank.
Sovereign Trust Insurance and ABC Transport were the best performing stocks, after gaining 10% each, to close at N0.22 and N0.33 per share on market forces. On the flip side, Forte Oil and Seplat lost 10% each to close at N14.40 and N441 on profit-taking and selloffs.

Market Outlook
We expect a mixed performance to continue in the midst of profit-taking at a time of prevailing low liquidity, oscillating oil price, even as Investdata sees the likelihood of a slowdown in the Nigeria’s expected Q2 GDP data. Speculators are nevertheless taking advantage of the seeming improvement in some other economic indices released recently, as well as corporate earnings showing the true position of Nigeria’s listed companies.
Also, long-term investors are reshuffling their portfolios in anticipation of interim earnings reports of dividend-paying companies.
The NSE’s rebound is yet to be confirmed, despite the positive outing last Wednesday which coincided with the swearing-in of the cabinet ministers as investors expect a more speculative move by market players taking a new position, especially the stocks that are selling at a huge discount to book value.
Discerning investors should target value stocks considering the current low valuation as they position for dividend income and capital gains, especially as the market’s Price to Earnings ratio remains attractive at 5.45x, which is well below the 8.24x average of its peers and its 9.56x five-year average. The current situation has revealed the existence of value and the high upside potentials for a rally. But then, wait to confirm reversal before jumping into a new position.
Investors should also take into consideration the expected economic reforms as President Buhari has assigned portfolio to the ministers. Central Bank of Nigeria (CBN) had earlier rolled out plans to boost productivity and investment by instructing the banks to lend more to the private sector. This is aimed at reducing banks’ participation in government securities and lending more to the private sector to drive economic growth.
There is also the likely impact of portfolio repositioning for the last quarter of the year ahead of Q3 financials in the midst of analyzing Q2 numbers and unfolding political events.