Introduction
• In this report, we observed the first-quarter financial numbers of Nigerian Breweries for the first quarter ended 31st March 2020, compared the same with figures released in the corresponding period of 2019 to establish growth and make recommendations accordingly.
• As is usual of Nigerian Breweries’ performance indices over the years, the result was a lower performance compared to those of the corresponding quarter.
• Nevertheless, we observed management’s effort at cutting costs, as major cost indices only adjusted marginally against those of the comparable period of 2019.
• Also, it is noteworthy that the industry currently faces tough challenges, especially in moving its products to some parts of the country, added to competition from cottage industries, among others faced by manufacturers in Nigeria, including the power that will continue to impact the performance indices of Nigerian Breweries negatively. 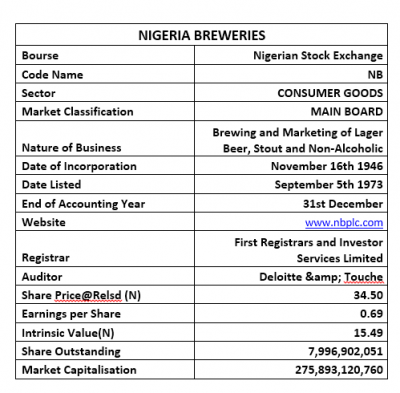 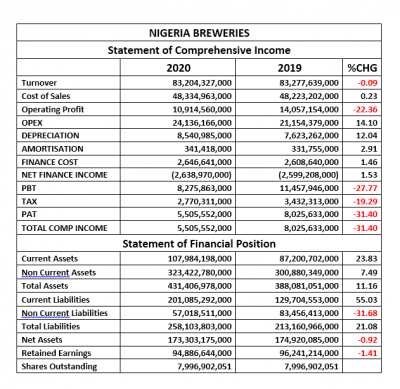 Financial Strength
• Debt Ratio revealed that the amount stated as Total Liabilities is approximately 60% of the Total Assets Valuation which is still an acceptable ratio when compared to those of industry peers.
• In other words, Total Debt at the end of the year can replicate Equity 1.49 times, as against the 1.22x of the 2019Q1, signifying a marginal growth in investors’ interest in the company through the period under review.
• Viewing the company’s financial strength from another angle, we observe that the Equity is approximately 40% of the Total Assets, which agrees with the Debt Ratio and confirms the higher portion of the debt in the assets valuation.
• Standing above-market Beta, the shares of Nigerian Breweries is academically agreed to be liquid and slightly above those of industry peers.

Efficiency Ratio
• Operating Cost through the period is 29.01% of the Turnover Figure, which represents a drop in efficiency over the comparable period.
• Similarly, a drop in efficiency measured at 10.12% was observed, when we tested the Turnover against the Total Assets value at the end of the two periods compared to this report.
• Working Capital Turnover Ratio is negative for the two periods compared; which means that the liabilities that need to be paid within the two quarters compared exceed the current assets that are ‘monetizable’ over the same period. This is an indication that the NB’s current liabilities remains on the high side.
• Confirming the above is the Working Capital Ratio/Current Ratio at below unity, implying the inability of the company to consistently offset its current liabilities with current assets when due.

Investment Ratios
• Going by the difference in the share price of Nigerian Breweries within both periods, one can safely conclude that investors re-valued it down by 46.09% between the last and current release date.
• Validating investors’ position is the drop observed in the earnings per share from N1.00 to N0.69.
• P/E-Ratio stood at 50.11x, lower than the 63.77x in the comparable period, confirming the drop in investors’ preference for Nigerian Breweries Shares.
• The said Earnings Per Share has a low yield of 2.00% on the share price, despite that drop in price, although this is 27.26% above the previous year’s yield.
• The estimated Book Value Per Share of Nigerian Breweries is N21.67, as against N21.87 in the corresponding period.
• Confirming an overvalued position and agreeing with our Intrinsic value for Nigerian Breweries share price is the Price to Book Value Ratio that stood above unity at 1.59x, compared to 2.93x in the similar period of 2019.

Valuation
• With low earnings reliance, due to the observed variations in Nigerian Breweries’ key indices, coupled with the consistent drop in performance/returns over the years, our blend of valuation tools projected lower returns for the giant breweries company. Thus, we have valued the shares at N15.49 and rated it a Sell.