(AMBROSE OMORDION) Nestle Nigeria Plc recently released its full year earnings report for the period ended December 31, 2016 to the market, in line with its corporate governance and post-listing requirement to promote international best practices, earlier than the released date of the 2015 numbers.
The strategy to reposition and offer its multiple products in affordable packages to meet different income levels at a time of Nigeria’s negative macro-economic climate continues to enable t:he company meet the specifications of the varius segments. If for nothing else, the recession has seriously affected the purchasing power of most Nigerians. This move has impacted the company topline positively, considering the nature of its products and wide acceptability they enjoy.
Nestle Nigeria’s scorecard for the year 2016 was a mixed performance as revealed by the numbers posted, a situation blamed on the high cost of servicing its foreign loans and importing raw materials due to the Naira’s devaluation. Also the increasing cost of sales and operating expenses combined have seriously impacted profitability for the period.
The company’s numbers, nonetheless beat market expectation and analysts estimates, showing how well positioned it is for future growth, with its continued focus on achieving cost efficiencies. Innovation and internal cost saving initiatives of the management boosted the first quarter profit level and at same time keeping the second and third quarter numbers in green amidst the CBN forex policy that pushed up all cost centres as diminishing returns set in.
However, the negative effect of this on the company’s shares price was mild, due to its shareholding structure.
This notwithstanding, the numbers released triggered the ongoing rally, despite the slimmer profit, as it still beat expectations, leading t payment of a N10 dividend that supported the long-term vision and potential of its business.
Nestle Nigeria’s full year earnings report is the basis for valuation in the market, compared to the 2015 numbers which revealed that the market price decline from N680 in 2015 to N570 representing 16.18% drop as at the release date of the results.
The company topline was up by 20.26% to N181.91 billion from N151.27 billion in the corresponding of 2015. Its reclaiming of the northern Nigerian market with peace gradually returning to the troubled the region’s eastern flank and neighbouring countries have equally supported its sales revenue for the period under review. Bottom line was in the opposite direction for the period, hindered by high financing cost that grew by 328.34% to N20.86 billion from just N4.87 billion in 2015. This was in addition to income tax for the period that jumped by 143.65% to N13.62 billion from N5.59 billion in 2015.
All these elements pulled down the profit line to N7.92 billion from N23.79 billion recorded in 2015, representing a 67% decline. Similarly, shareholders funds for the period declined by 18.76% to N30.88 billion, from N38.01 billion in 2015. 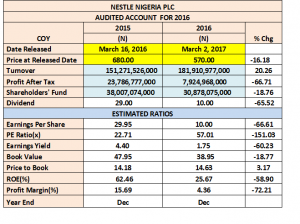 Source: Company Financial & Investdata Research
Analyst Opinion/Recommendations
The high production cost and currency deprecation that affected the company performance in 2016 are expected to reduce mildly with the Central Bank of Nigeria’s intervention in the fx market and the likely review of the ban on 41 items barred from accessing forex.
Added to these is the expected faithful implementation of the recently released four-year economic recovery growth plan, which the Federal Government hopes to revamp the economy with, putting it in the path of prosperity again. As special stimulus package for manufacturing sector is underway in form of special funds with low interest, special tax system for the sector which would likely in form of tax holiday to enhance productivity and output. Also, is hope of expected mild recovery in the purchasing power of Nigerians going forward which will boost sales revenue.
Meanwhile, for the company’s Q1 2017 scorecard, expect mild performance as profitability might still be under pressure, due to the prevailing higher operating cost and weak macro-economic environment.
Summary and valuation
We expect improvement in demand as the economy rebounds gradually as more consumers are captured with the repackaging of products to meet different segments of its market income level. The continued investment in key brands and the company’s backward integration and management of cost pressure will continue to impact on bottom-line.
Nestle’s 2017 earnings is projected at N12.72 billion, representing a 60% increase from 2016 N7.92 billion. The company’s 2016 Price/Earnings Ratio at 57.01, down from its Q3 level of 431.08x as a result of growth in earnings, is expected to decline to 23.12x in 2017 as earnings. Its 2016 profit margin was weak at 4.36% compared to 15.69% in 2015. We maintain our position of HOLD for long term investment horizon.
Technical View

Nestle in the last two years has been on a bearish channel with different attempts to rebound within the channel as it recently broke down the major strong support level of N615 to a low of N570 to retrace up on it financials that beat market expectation, despite the earnings decline. The stock is currently trading above its 20 and 50-Day moving average at N735. Currently, MACD is bearish for the last 23 trading sessions. RSI is reading 47.95 and at the same signaling buy, while other technical indicators like CCI and SO are signaling buy.
The trending momentum and direction is strong as ADX is above 20 at 30.70, but money flow index is looking down, indicating that funds are leaving the stock which is a sign of profit taking. 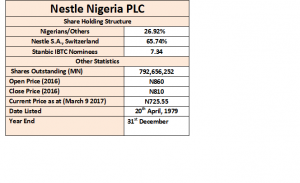 Source: Company Financial & Investdata Research
Management
The impact of strategic plans of the board and management, led by David Ifezulike and Mauricio Alarcon respectively is yielding results already as internal cost management is reducing the impact of the weak macro economy and Fx market afflicted cost pressure. This is despite the cost of expansion and production drive of the management to deliver value to all stakeholders. This has however reflected in its 2016 performance, despite the challenging business environment and low purchasing power of the people.
Five-Year Financial Analysis
The company’s best international practice and consistency in the release of its financials over the years have helped the market and analysts predict and forecast its performance and release dates. This has added to its valuation status as it stands sure in portfolio management effectiveness. The market price as at release dates on the other hand is experiencing decline after two years of trending up within the five years under consideration. The price move from N981.00 in 2012 to an all-time high of N1,071.00 in 2013, closing at N570 per share when the 2016 audited result hit the market recently from N820 in 2014 to N680 in 2015.
Looking at the company’s performance critically for the last five years, it is evident that there has been a stable up-trend performance with positive numbers that reveal the competence of the successive management regardless of challenging business environment but was hard hit in 2016.
The company’s topline for the period was up by 55.86% to N181.91 billion from N116.71 billion in 2012; while profitability level for the same period was down 62.54% to N7.92 billion, from N21.14 billion recorded in 2012 after recording high of N23.74 billion in 2015 where the highest reward was given to shareholders in form of N29 dividend, Even when earnings remained almost flat in three of those years under consideration before the decline in 2016 that reduce its shareholders dividend to N10. Within the same period, the economy has experienced mixed movement of progress and retrogression to the current situation of the nation.
Meanwhile, shareholders fund stands at N30.88 billion from the N34.19 billion posted in 2012 after recording a high of N40.59 billion in 2013. Dividend grew through the period from N20.00 per share in 2012 to N29 per share in 2015 before it dropped to N10 in 2016. Please note that dividend reward grew more than the revenue and earnings for that same period which is not too good. Such high payout ratio does not support future payments and expansion. 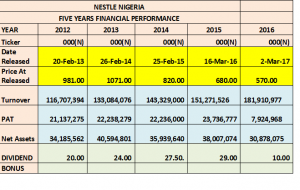 Source: Company Financial & Investdata Research
Five-Year Estimated Ratios
Earnings power of Nestle within (2012 to 2016) seems to be strong enough to have supported it share price for that same period with the help of its shareholding structure and relatively small number of shares in issue. The drop in earnings from N26.67 in 2012 and N29.95 in 2015 to N10.00 in 2016 has increased investors waiting periods over the years as PE ratio stood at 57.01x from low of 22.71x in 2015 and other previous years from 2012.
As observed, this is because of the sharp drop in earnings while market price relatively remained high. The Book Value of the equity over the years revealed high premium on the stock which was as a result of consistent dividend and strong numbers with that of 2016 at N38.95 as against the market price of N570 when the report was released. Long term investors have over the years recouped their investment, and they continue to enjoy relative capital protection in this stock. 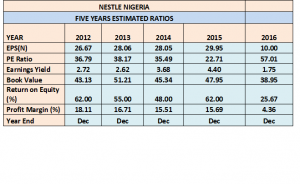