As with other sectors of the economy, the year 2020 was unprecedented in the scale and magnitude of economic turbulence both globally and locally, as it affected operators in the Nigerian oil and gas and indeed the energy sector.

It commenced with high expectations from the sector having significantly suffered the telling effects of the novel Coronavirus pandemic that rampaged the world economy, forcing most governments to impose lockdown in their frenzied attempts to slow the spread and understand the nature of the virus that killed indiscriminately. Owing to the lockdown, factories and production facilities were shut, local and international movements were restricted to essentials only, hitting global demand for oil hard, as oil price tumbled helplessly below production cost.

The drop first induced a reduction in the price of petroleum products across the country, with the Nigerian government taking advantage of the situation to deregulate the sector, especially by putting an end to the age-long subsidy regime. Nevertheless, as the world recovers from the pressure of COVID-19, and helped by the availability of the vaccine, oil price has maintained a clear uptrend, from the start of 2021 till date, closing above $65 per barrel.

Signs of inventories declining in the U.S. and elsewhere point to the success the desire by the OPEC cartel has succeeded in draining the surplus left in the wake of an historic demand slump caused by the pandemic.

According to the report, OPEC expects a stronger second half of 2021, which simply means that except the cartel resolves to boost supply, global inventories will face sharp decline on increase demand, thereby helping price trend further north. A report from Iraq says OPEC is unlikely to change its output policy at its March meeting, but whichever way it is viewed, price will increase through February, and may likely continue after the meeting, should OPEC maintain its output policy.

Back home, the 2021 Appropriation Act tagged: “The budget of economic recovery and resilience,” sets expected Oil GDP at N10.102tr at production rate of 1.86mbpd and benchmark price of US$40/b.

Meanwhile as at the time this report, Brent crude traded at around US$62.43/b, which is a plus for Nigeria’s 2021 spending plan as passed by the National Assembly, although this is when production equals sales through the year. The 52-week price of Brent crude ranged between US$32.00 and US$62.83. See the below chart for one year trend of brent crude price.

Nevertheless, the rising crude price, and the deregulation of sector pose a great challenge to the public, with the landing cost of Premium Motor Spirit or petrol charging upward even as the populace groan under its weight in the near term. This will in turn continue to drive the already high headline inflation rate northward, frustrating the government’s efforts at achieving the purpose of the budget.

Oil & Gas Sector of the NSE

While observing operators in the oil & gas sector of the economy and measuring their respective performance, profit and contribution to the country, we have narrowed down our work to operators in the sector who shares are listed on the Nigerian Stock Exchange (NSE).

Of the eight oil majors with shares publicly traded, only Oando Plc has no updated financial score-card owing to its frosty relationship with the apex regulator of the nation’s capital market- the Securities  Exchange Commission (SEC). This report is therefore focused on the remaining seven stocks.

Their businesses are dominated by the exploration, production, marketing, refining and/or transportation of oil and gas products, coal and other consumable fuels; as well as construction or provision of oil rigs, drilling equipment and other energy related services and equipment.

While driving home our points on the sector’s performance in the course of the year 2020, we have explored the financials of all seven listed equities, which reported N292.54 billion cumulatively in the first quarter of the year as Turnover. By the second quarter, the number climbed to N464.32 billion, before closing at N693.88 billion in the first nine months of 2020.

This means that turnover average for the three quarters was less than the first quarter numbers. Reasons for this are not fat-fetched given that the pandemic induced lockdown only reared its head in the final days of March, the last month of the first quarter of last year.

Total Nigeria reported the largest turnover of N151.70 billion in the group, followed by SEPLAT’s N135.62 billion (note that whereas Total Nigeria is engaged in petroleum products marketing and sales, like most others in the sub-sector, SEPLAT is into crude oil and gas exploration and production). Ardova (formerly Forte Oil Plc) was next with a turnover of N128.17 billion; Mobil Oil Nigeria (11Plc) posted a turnover of N114.74 billion; while others posted numbers below N100 billion in all of the three quarters under review.

Contribution to the economy in form of Taxation

Measuring contribution of the sector to the nation’s economy by tax paid in the period, all seven listed equities reported a total of N4.55 billion in the first quarter, N13.87 billion in the second quarter and N15.68 billion cumulatively in nine months.

In the period, Seplat Petroleum reported the highest tax of N11.805 billion at the end of the third quarter; with Mobil Oil (11Plc) coming a very distant second with N2.01 billion; while Ardova and Conoil announced N533.02 million and N522.73 million tax respectively. Kindly work See the table below for a detailed analysis.

Performance by Profit after Tax

Unlike its peers in the healthcare and industrial goods sectors of the Nigerian Stock Exchange, profit in the oil and gas sector seems to have gone on holidays, as seen in the numbers from companies operating in the sector in the first three nine months of last year. The situation is such that unless by a miracle that happened in the final quarter of the year, shareholders of these companies should bury the thought of a dividend.

Of the seven equities, only three- Ardova, Conoil and 11Plc posted profit for each of the three successive quarters under review. Others reported loses, but Total and Eternal Oil came out of the woods by the third quarter of the year.

Profit after Tax reported by all the listed equities in the sector was negative from the first quarter through the third quarter of 2020 as shown in the table below. Net Profit in the first quarter was N34.16 billion; stagnating at N34.84 billion at the end of the half-year. The sector’s health barometer took a nosedive, suffering a N26.74 billion loss by end of the third quarter, even after Total and Eterna posted marginal profits. According to the table below, profitability was high in 11 Plc followed by Conoil and Ardova Plc.

Meanwhile, Net Assets is estimated at N779.59 billion which is slightly higher than the Total Liabilities value and 52.30% of the Total Assets value.

Kindly observe that Seplat led in all the three observed indices, while Eternal has the lowest Net Assets Value.

In summary, we conclude that investors’ position in these stocks is academically secured, while the regulators take care of other safety measures.

The recovery of the global oil market and deregulation of the domestic downstream sector could drive the much desired recovery in the sector, leading to growth this year.

Deregulation and its full implementation could drive earnings and support price rally in the sector as government and its agencies continue to hike pump price of fuel, which could on the other hand further reduce purchasing power among the populace.

The price increase is likely to boost the margin of players in this petroleum marketing business. Investdata also believe that the passage of Petroleum Industry Bill will boost investment flow across the oil and gas value chain, considering the nature of their services and products.

Furthermore, we see no reason why the country continues to incur heavy losses running into billions of Naira through the existing refineries. We believe six years is more than enough time for any serious minded administration to have fixed these refineries and put them into use. Instead, successive governments have preferred the fraudulent option of either exchanging crude for refine fuel, or purchased products from other refineries across the globe, even other African countries. The rational thing would have been for government to bring back the Japanese who constructed these national assets to revamp them, instead preference has been given to petroleum subsidy scams of various degrees involving friends of government, encouraging the corruption of everybody and institution along the value chain. Would it not have been nobler for government to fix the refineries and sell crude to them at subsidized rates to stabilize domestic prices, save foreign exchange, retain jobs and expertise? It is even more alarming and shameful that the government and its senior officials are waiting for and relying on a Greenfield refinery being constructed by a private businessman to resolve the seemingly intractable challenge of product importation, as if the promoter of the project is some charity.

Meanwhile, for further details of companies to look out for in the Nigerian oil and gas sector, kindly login to Investdata’s BUY and SELL signal. 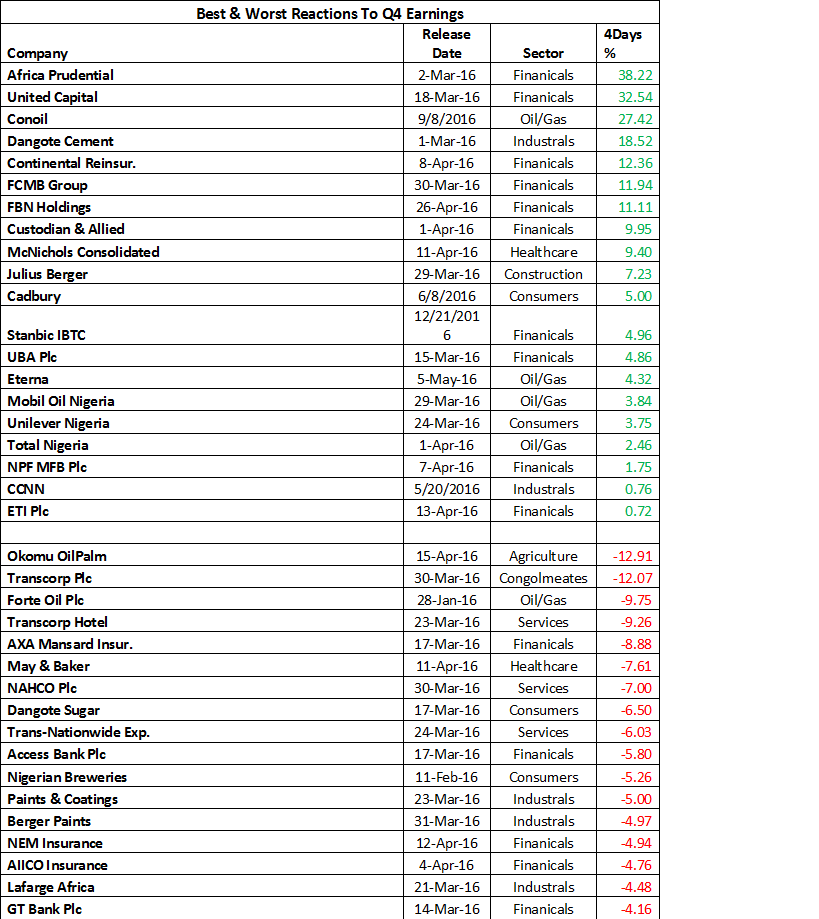 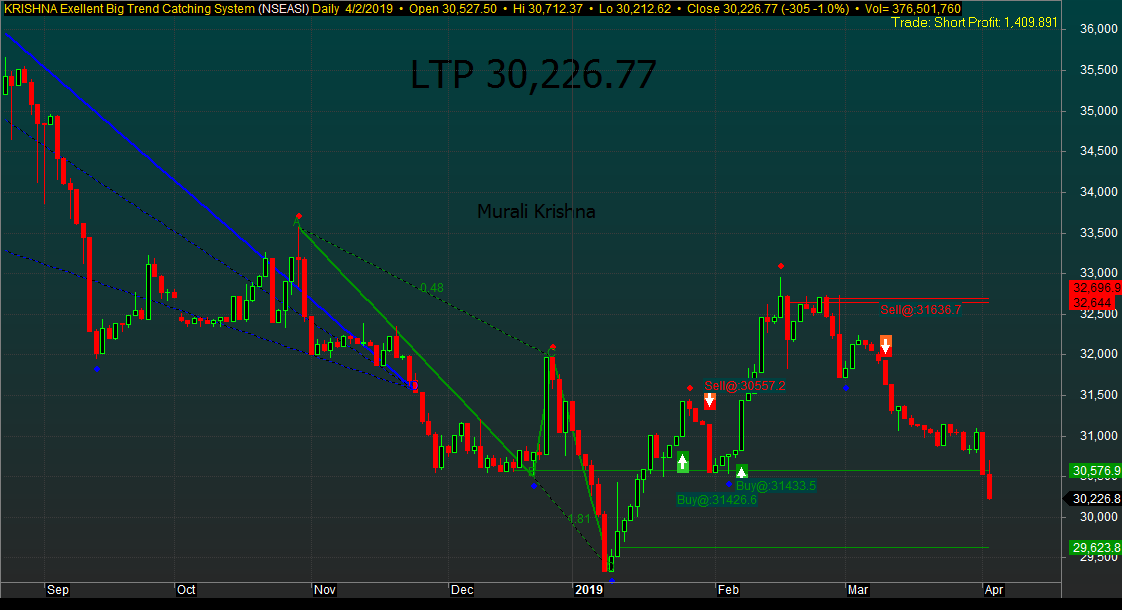 Corporate Actions On Nigeria’s Stock Exchange As Of March 2, 2018