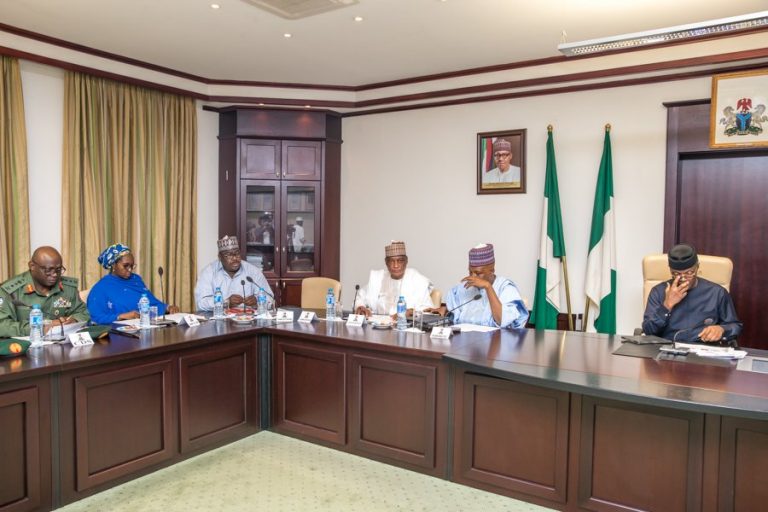 Photo: Acting President Osinbajo, Governor Shettima and others at the meeting on Monday in Abuja

In what may be a template for the reconstruction work in insurgency ravaged North-East Nigerian states of Borno, Yobe and Adamawa, the Federal Government, on Monday evening unveiled plans to construct 3000 new homes, 10 police stations, 18 primary and secondary schools.
This means a boom in the months ahead for players and professionals in the nation’s construction industry, with the expected surge in demand for building materials from makers such as Dangote Cement; and especially Lafarge Africa, whose Ashaka arm is just a shouting distance away. Not likely to be left out is Sokoto-based Cement Company of Northern Nigeria (CCNN), a member of the Abdulsamad Rabiu owned BUA Group. Service providers like Julius Berger may not be left out of the largese, particularly as there are road projects, all of which would result in enhanced revenue and profit for these companies listed on the Nigerian Stock Exchange (NSE), a situation that would see their share prices respond appropriately.
Under what has been tagged the Bama Initiative, health centres would also be built, while a Special Bama Squad would be created for security and 1500 local hunters recruited as Agro Rangers, among others, all of which cost would be borne 67% by the Federal Government, leaving the rest 33% to the Borno State Government.
Equally, 20 doctors, 100 nurses and other relevant health officers are to be recruited to provide essential health services for the town, in addition to employment of teachers who will be deployed to 18 new schools to be constructed in the areas.
The agreement was reached at a government-wide meeting presided over by Acting President Yemi Osinbajo, attended by the Governor of Borno State, Alhaji Kashim Shettima, ministers and service chiefs.
Under the Bama Initiative, covering towns such as Bama, Banki, and Gulumba Gara, among others, the Federal Government in partnership with the Borno State government is expected to carry out actual re-construction of houses for the return of Internally Displaced Persons (IDPs) as well as provide infrastructure such as roads for Bama town and adjoining communities.
A statement by Laolu Akande, spokesman to Acting President Yemi Osinbajo, said the Initiative will also see to the kitting and deployment of thousands of police officers and officers of the National Security, Civil Defence Corps who are expected to be trained for the special task.
Road re-construction projects are also featured under the Bama Initiative which is now under exploration, including the re-habilitation of Maiduguri-Bama-Daral Jamal-Banki road network.
The welfare of returnees is also a major priority of the plan, ensuring a comprehensive support programme for IDPs as they return. It is expected that the implementation of the plan will kick-off in weeks.
The statement quoted Osinbajo as saying after the meeting that “the plan is a very clear, we all know what direction we should be headed.”
Akande also quoted Governor Shettima as assuring that the “partnership is certainly going to work.”
The meeting was attended by the Ministers of Defence; Rtd. General Mansur Dan-Ali, Interior, Rtd General Abdourahman Dambazau, the Budget & National Planning (of State); Zainab Ahmed and the Power, Works & Housing (of State); Alhaji Mustapha Baba Shehuri.
Other top government functionaries included the Chief of Staff to the President, Alhaji Abba Kyari, the National Security Adviser to the President Rtd. General Baba Munguno, as well as military, police and civil defence chiefs, and the Director-General of National Emergency Management Agency (NEMA)