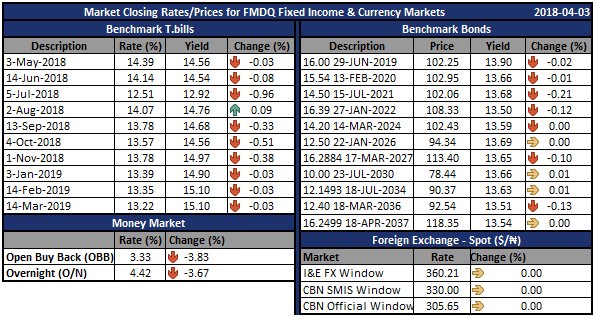 Nigeria’s Interbank remained relatively stable at its previous rate of N305.60/$, as the Central Bank of Nigeria (CBN) intervened in the market to the tune of $210m, with the Wholesale segment receiving $100m; while the Small and Medium Enterprises (SMEs) got $55m; leaving Invisibles segment, which comprises Basic Travel Allowance, Personal Travel Allowance, medical bills and tuition fees, with $55m.
The Nigerian Autonomous Foreign Exchange Rate Fixing (NAFEX) rate fell by 0.09% to N360.33/$, while rates in the Unofficial market remained stable at N360.50/$.
Previous NTB auction result for April 4th 2018 were 11.75,12.70 and 13.04 respectively for 91,182 and 364days.

Bond market
Trading on Nigeria’s bond market kicked off Monday on a very quiet note, with a total of N1.0bn in executed tradable bonds during the period as players witnessed a slight interest on the 2021 bonds. This situation enough to compresse yields by 2 basis points on the average.
We expect yields to inch slightly higher during Tuesday’s session due to the relatively weak demand from domestic investors.
We expect OMO Treasury bill sales by the CBN as we await release of the second quarter FGN Bond calendar by the Debt management office (DMO).

Treasury bills
The Treasury Bills market was bullish on the back of actively purchased bills from traders, with demand mostly on the May to December maturities, while the longer maturities remained flat.
However, OMO sales was withheld by the Central Bank of Nigeria (CBN) for a second consecutive session, consequently.
Average yields closed by 10bps on average, with most demand witnessed on the last issued OMO bill 6th -December 2018.
We expect the market to remain bullish Tuesday, due to anticipated inflows from retail FX refunds.
The OBB and Overnight rates remained relatively stable, today at 3.33% and 3.50% respectively, as system liquidity remained significantly buoyant. We expect rates to remain relatively stable tomorrow, barring a significant OMO sale by the CBN.

You may reach our independent Fixed Income Analyst on: judydial47@yahoo.com