Market Update for March 20, 2017
Nigeria’s equity market on the first trading day of the week closed marginally higher on huge volume driven by transactions in the shares of Custodian & Allied insurance and FBN Holdings. Already, investor confidence is gradually being restored following improvements in the nation’s fundamentals to strengthen the level of trust in the government and its economic recovery growth plan. The implementation of the plan with workable strategic actions alongside the Central Bank of Nigeria’s intervention in the forex market that is also slowly, but steadily yielding results, if sustained will widen the gains recorded so far.
Also, members of the CBN’s Monetary Policy Committee (MPC) at its ongoing meeting may likely vote to keep rates unchanged, to enable them assess the impact of the forex policy implementation. Add this to the decline in Nigeria’s inflation data that witnessed a decline for the first time in 15 months.
Monday’s trading activities and the movement of the index from green to red in the hours leading to midday, before closing slight in the green reflects investors’ mood as they weighed the various options available to the MPC to consolidate the little gains recorded in the economy. Another factor that cannot be wished away easily when considering reasons for the market’s behavior is the class of earnings reports that will hit market as the earnings season enters its peak period.
Even the global markets were mixed in reaction to hike in the world interest rate, oscillating oil price, declining dollar in the face of decision by the UK to trigger Article 50 of the Lisbon Treaty, to begin the formal negotiations on terms of Britain’s exit from the European Union next week- Wednesday, March 29.
On that date, which also marks the 60th anniversary of the union, Prime Minister Theresa May will write to the EU to formally announce the take-off of the process, despite warnings of dare consequences by other power blocs and amidst fear that such would trigger exits by other nation’s eager to take their destinies in their own hands.
This move by the world’s financial centre poses a huge threat to common currency of the Euro zone, which is experiencing some correction.
These and more remain sources of grave concern to investors.
Back home, the composite NSE All-Share Index gained 18.39 points to close at 25,671.55 points, from an opening figure of 25,653.16 points, representing a 0.07% growth for the period on a high volume of trade, compared to the previous day. Buying volume of total transactions for the day was 100% to sustain five trading sessions of bull market. Similarly, market capitalisation for the day closed higher at N8.881 trillion, from an opening value of N8.88 trillion, also representing a 0.07% appreciation in value. This further reduced the All-Share index’s year-to-date negative position to 4.48%, while market capitalisation for the period adjusted to N362.95 billion, representing 3.82% loss YTD, from the opening value.
Value gain was recorded in stocks like Nestle, Mobil, Guaranty Trust Bank and Ecobank Transnational Incorporated.
Market breadth for the day turned negative and weak as the number of decliner’s outpaced advancers in the ratio of 22:13 to continue it bull transition.
Market activities in volume and value were up by 227.14% and 37.23% respectively to 495.24 million of shares from 151.21 million in the previous day and N2.53 billion, from N1.86 billion.
Transactions in financial services stocks like Custodian & Allied Insurance, FBN Holding, UBA, Zenith Bank and Diamond Bank dominated the day’s activity chart as most traded equities by volume.
The NSE All-Share index and all sectoral indices closed green, except for the NSE Pension and NSE Premium that were down to end the day’s trading.
No results were released during trading.
The day’s trading produced Nacho as top advancers, as it notched 5.00% to close at N2.10; followed by Mobil Oil with 5.00% at N294 on market forces, while United Capital led the decliners log, shedding 5.00% to close N2.66, ahead of Guinness Nigeria’s 4.95% to close at N63
NSEASI DAILY TIME FRAME 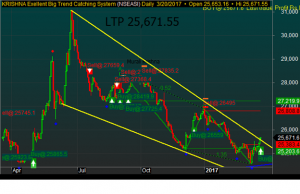 The index on a daily time frame has broken out of the falling channel on a strong volume and positive sentiments as revealed by the sell/buy volume index. The outcome of the ongoing MPC meeting, the strength of earnings reports and other market forces will determine the continuation of the trend or pullback
The index candlestick formation pattern as at close of trade with increasing volume traded, indicated some sort of pullback due to likely profit booking. But funds are entering the market as indicated by MFI
The current trending ability of the market on a daily time frame is strong, as ADX is above 20 at 25.03, MACD still bullish since the last eight trading sessions, while RSI is reading 57.61 as at the close of trading.
Again, hold your position in value stocks likely to pay dividend and those that have recommended dividend already, but whose prices are falling due to market forces.
Watch out for support levels to reposition as recently adjusted share prices for dividend are rebounding.