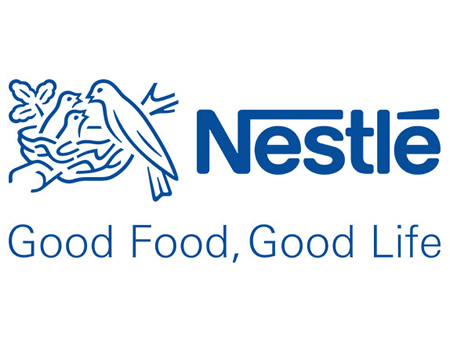 Key Investment Ratios
• This report on observes the financials for the first quarter ended 31st March 2019, and compares the same with that of the corresponding period of 2018 to establish growth.
• Meanwhile, the company’s financials for the full year ended 31st December 2018 were used in the valuation analysis of its shares.
• We have conservatively valued each unit of Nestle Nigeria at N833.71, which is 40.02% below its current market price on the floor of The Exchange.
• In our opinion, the consistent growth in its dividend continues to attract positive sentiments from the investing public, which is responsible for the over-valued state of its shares on the exchange.
• We have also observed the low number of shares outstanding, which undoubtedly stands it out and continues to sustain its shares price and dividend payout over the years.
• See below for a comparison of released figures/our opinions. 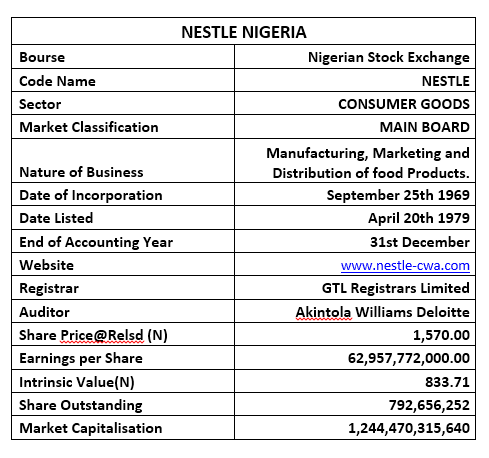 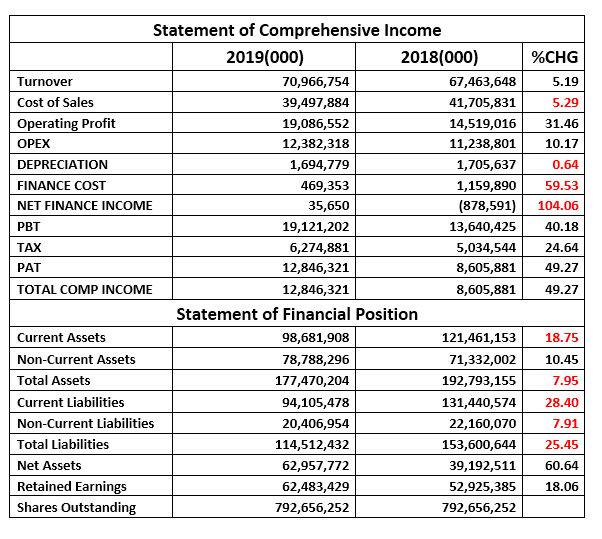 Financial Strength/Solvency Ratios
• Debt Ratio is currently estimated at 0.65x, down from the 0.80x estimated in the 2018 first quarter financials.
• Total Debt to Equity is estimated at 1.82x, as against the 3.92x estimated in the comparable quarter. This is quite impressive.
• We also tested the Equity Ratio and established that Equity is same as 35% of the Total Assets Value stated at the end of the quarter, which is above the 20% ratio estimated from 2018 financial indices.
• Beta Value at the time of this report stood below unity at 0.83x, below the industry average of 0.88x, just as it was below the market Beta.

Efficiency Ratios
• Operating Expenses to Turnover value is same as 17.45%, or a 4.74% growth over the 16.66% estimated from 2018 first quarter financials.
• Turnover to Total Assets Ratios stood at 39.99%, as against the previous 34.99%, which is 14.28% improvement in efficiency over a comparable period of 2018.
• Working Capital Ratio, which indicates effectiveness in the use of working capital was estimated at 15.51x, compared to the negative 6.76x estimated in a similar period of 2018.
• To further test Nestle Nigeria’s efficiency, we checked the Working Capital Ratio, which confirmed that Current Assets is slightly higher than current liabilities, after dropping in the corresponding quarter.

Investment/Valuation Ratios
• At the end of the first three months of 2019, the management of Nestle Nigeria achieved Earnings Per Share improvement of 49.27%, from the previously estimated N10.86 to N16.21.
• P/E Ratio slipped by 33.01%, after rising to 96.87x from 144.61x. Please understand that the drop is an indication that the price did not follow the same momentum as growth in EPS. Meanwhile, the high P/E is a reflection of investor confidence in the company’s shares.
• The said Earnings per Share is a 1.03% yield of the current market price of Nestle Nigeria’s shares on the NSE as at the time the result was released to the investing public.
• We have estimated the Book Value of Nestle Nigeria per share at N79.43, compared to the previous estimate of N49.44. This is another pointer to investors’ high sentiments/confidence in the stock.
• Confirming the over-priced position of the stock is the Price-to-Book Value Ratio that is currently estimated below unity at 19.77x.

Valuation
Having observed the books of Nestle Foods Plc, we took into consideration the consistent growth in the company’s reward to investors, while our blend of valuation tools fairly placed each unit of Nestle Nigeria at N833.71. Meanwhile, considering the fact that the company had enjoyed higher valuation over the years, we have rated the shares HOLD.