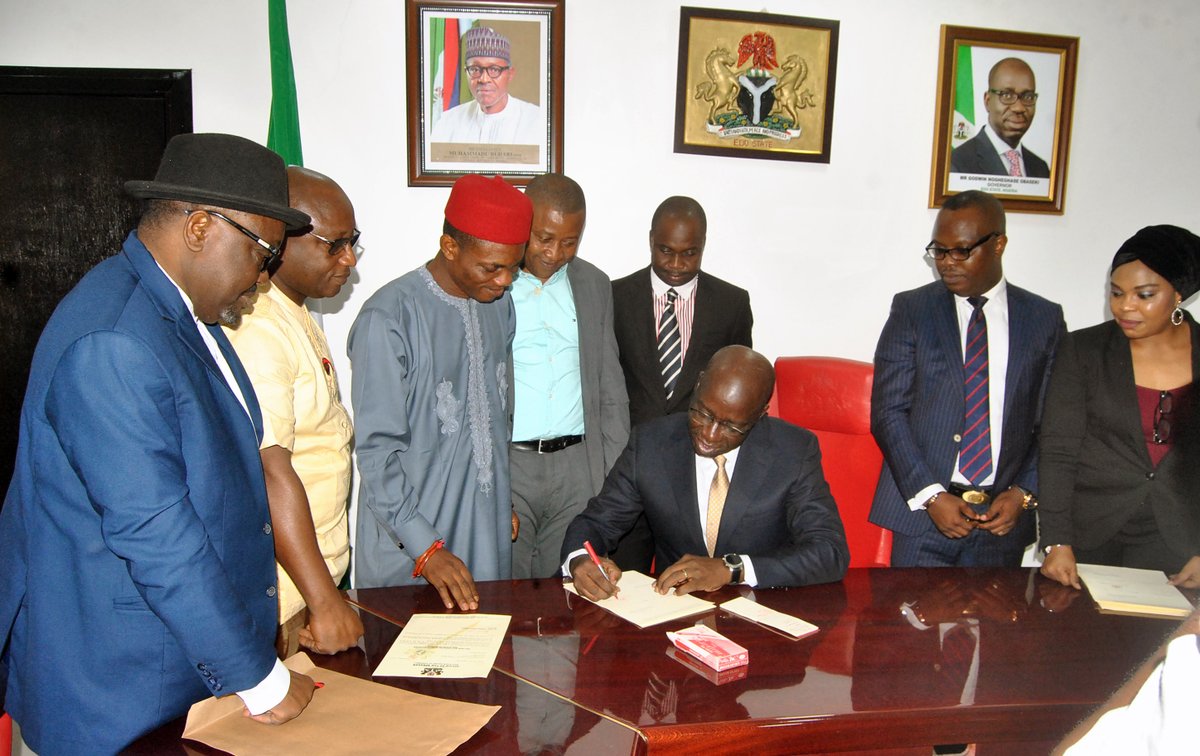 Governor Godwin Obaseki of Edo State has signed into law the state’s 2018 Appropriation Bill pegged at N146bn by the executive, but increased to N150bn and passed by the State House of Assembly to accommodate more infrastructural and agricultural projects.
At the ceremony held in Government House, Benin City, on Friday, Obaseki applauded the speedy passage, describing it as remarkable and a sign of the harmony between the state’s executive and legislative arms of government.
The governor expressed gratitude of the state executive council for the “unique and historic event of the signing of our Appropriation Bill before the end of the year. I cannot recall when this sort of thing occurred in Edo State in the last seven to eight years.
“This portends a lot of good things to come. It shows the seriousness of both arms of government and more importantly, it shows that we are working together in the interest of the people of Edo State,” he added.
The governor assured that his administration has set a target of 95% performance level for the 2018 budget, assuring that “he House is totally aligned with us and agrees with the principle of our budget, which is growth.
“This is taking a cue from what is happening at the centre. We have to invest in areas that will help us grow the economy, create jobs and improve the revenue of government,” he stressed.
Speaker of the Edo State House of Assembly, Rt. Hon. Kabiru Adjoto, while presenting the bill for assent, said the increase in the budget figures was to enable government drive its developmental goals without financial hiccups.
“The initial budget was N146 billion but we have increased it to about N150 billion taking into cognizance the prevailing realities. We are confident that this is within a realistic range,” he added.
Adjoto said that the parliament identified areas of growth and made minor adjustments in the interest of Edo people, particularly in agriculture and infrastructure.
Obaseki said the legislature’s decision to allocate N1bn to livestock production and fisheries, as well as the decision to retain another N1bn “for job creation in the state showed that we all appreciate the need to invest in youths and accelerate economic growth.
He noted that the focus on agriculture was to ensure that youths are carried along in the administration’s development initiatives, adding, “I am particularly grateful that you improved our provisions for critical areas of growth, particularly agriculture.
“In the area of agriculture, I observed that the House increased our estimates significantly by almost 100 per cent. In particular, in the area of livestock and fisheries, there was a N1bn increase.
“This is important because, as you know, we have a lot of initiatives in this regard, especially as it relates to the resettlement programme we have for persons who were trafficked and have now returned, as well as the young people we are encouraging to go into entrepreneurship.”
He expressed the administration’s appreciation of the lawmakers’ decision to retain the cardinal job creation initiative, being promoted for the first time, which he agreed is novelty that is significant and “will help us train and give skills to young men and women and match them with jobs as part of our programme to create a minimum of 200,000 jobs within four years.
“So, you are not just aligned with us as a government, you are aligned with the principle and thinking on which this administration is anchored,” the governor added.