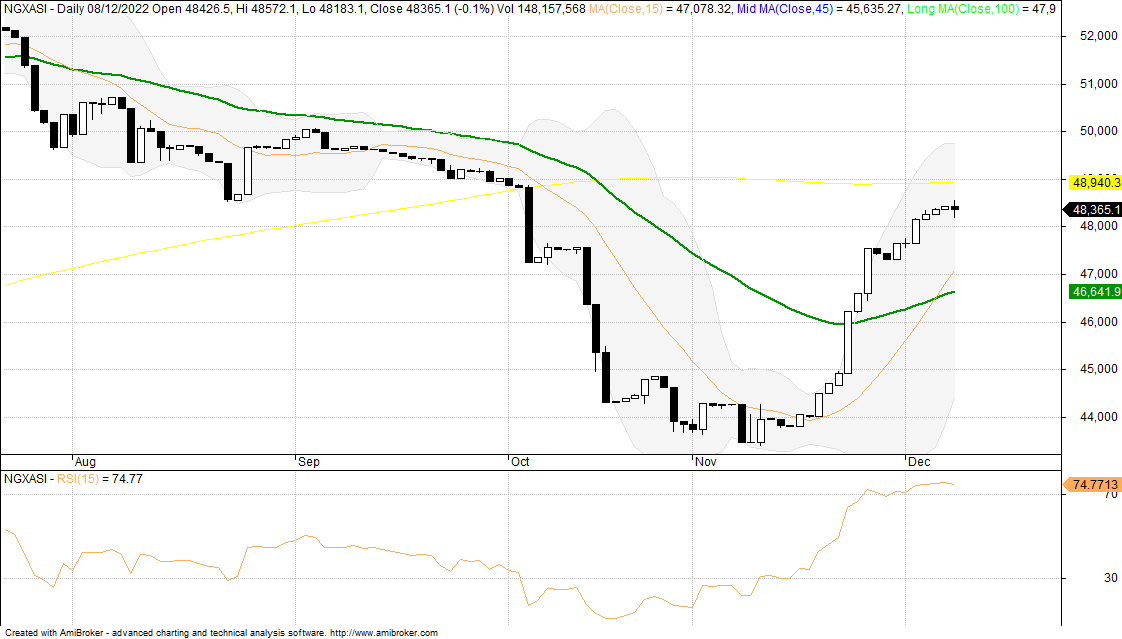 The mixed session on the Nigerian Exchange continued Thursday, when the benchmark NGX All-Share index recorded the first dip for the week after six consecutive sessions of bull transition on profit taking that ushered the market into the distribution phase in the midst of positive market breadth and less than average traded volume.

Market volatility persist as it presents a huge opportunity for discerning investors and technical traders to buy low and sell high as the primary trend of recovery is still intact ahead of year-end seasonality and expectation. As position taking in some of the major sectors of the market continued, especially in industrial goods and banking stocks.

The momentum behind the NGX index action as at the end of Thursday’s trading remained strong in the face of mixed sentiment, as all eyes are on the November Consumer Price Index next week and the likely inflow of funds from excess liquidity in the money market at the end of the week TB primary market auction, due to the prevailing high dividend yields in the stock market and shorter time frame to achieve similar returns with possibility of capital gains. With the Santa Claus rally around the corner and year-end window dressing by fund managers, and listed companies that want to close the year higher.

The topping formation and oscillating volume pattern had finally given way for correction and pullback in the face of the expected closed period notification and 2023 corporate action, with the position taking continuing ahead of the full-year earnings season, as bargain hunters and speculators take advantage of this pullback or selloffs to buy low amid a high volatility. Therefore, target companies with a consistent track record of dividend payment with strong fundamentals and growth prospect that will support further price and payout.

Technically, the market is on its distribution phase, setting the stage for another uptrend after forming a cup and handle chart pattern on a daily time frame. The ongoing intraday oscillation was due to profit taking and portfolio repositioning, as revealed by momentum indicators for the day which were strong.

These indicators appear to be mixed, as the ADX read 49.36 at the end of the day, just as, RSI and Money Flow Index slowdown to read 75.77 and 87.66 points against the previous session 75.94 and 94.48 points respectively. The continuation of this uptrend depends largely on the interplay of market forces and inflow of funds into market as trading open this last yarding day of the week. Market players had continued to digest the mixed macroeconomic data released before now ahead of November inflation reports and Q3 company fundamentals in the midst of year-end seasonality and expected 2023 unaudited accounts in January, alongside the election uncertainty.

As mentioned earlier, the oscillating volume traded pattern suggests the gradual return of many players who had been seating on the fence before now, including institutional investors holding cash to confirm the primary’s market direction, especially given the anticipated financial market reset in 2023, and beyond expected to create wealth for action takers are underway.

Oil price oscillation continued, as it traded at $76.61 per barrel on impact of oil price cap, Canada stopping support for international oil and gas projects, reopening of some province in Chain after Covid 19 restriction in the midst of geopolitical tension and fear of recession as a result of high interest rate and inflation across the globe. Also, supply tightened due to the Russia-Ukraine war that has been lingering. The up and down movement of oil price also continues to drive volatility.

Thursday’s trading started in the upside till midday before pulling back on profit taking in MTNN and others to oscillate for the rest of the session, in the midst of buying interest in blue chip stocks, a situation that pushed the NGX’s index to an intraday low of 48,183.06bps from its highs of 48,572.14bps before closing slightly below its opening level at 48,365.14bps.

Market technicals were weak and mixed, with lower volume of trade than the previous session in the midst of breadth favoring the bulls on a mixed sentiment as revealed by Investdata’s Sentiments Report showing 47% buy position and 53% sell volume. The total transaction volume index stood at 0.86 points, just as impetus behind the day’s performance was strong as Money Flow Index was looking down at 87.66pts, from the previous day’s 94.48pts, indicating that funds left in the market on profit taking.

Meanwhile, the downturn was driven by profit-taking in MTNN, FBNH, GTCO, WAPCO, Cadbury, Honeywell and Capital Hotel, among others, which impacted negatively on Year-To-Date gain, increasing it to 13.22%. Market capitalization gain YTD dropped slightly to N3.98tr, representing 18.15% rise over the opening level for the year.

Sectorial performance indexes for the session were mixed, as the NGX Industrial goods and Banking closed higher by 1.11% and 0.46% respectively, while the NGX Insurance index led the decliners after losing 0.48% followed by Consumer goods with 0.01%.  Just as NGX Oil/Gas was flat.

Market breadth turned positive as advancers outnumbered decliners in the ratio of 15:10; just as activities in volume and value were down, after investors exchanged 142.91m shares worth N2.87bn. Volume was driven by trades in ETI, FBNH, Transcorp, Accesscorp and Sterling Bank.

Chams and RT Briscoe were the best performing stocks, after gaining 9.09% and 7.69%, closing at N0.24and N0.28 per share respectively on market forces. On the flip side, Capital Hotel and Honeywell Flour lost 9.80% and 9.09% respectively, closing at N2.76 and N2.20 per share, purely on selloffs and profit taking.

Being the last trading day of the week, we expect a mixed trend and sentiment to continue on profit booking and portfolio reshuffling ahead of year end seasonality in the face of election uncertainty, as pullbacks add more strength to upside potential, so investors should take advantage of price correction ahead of year end seasonality. Also looking at the trends and events across the globe and domestically.