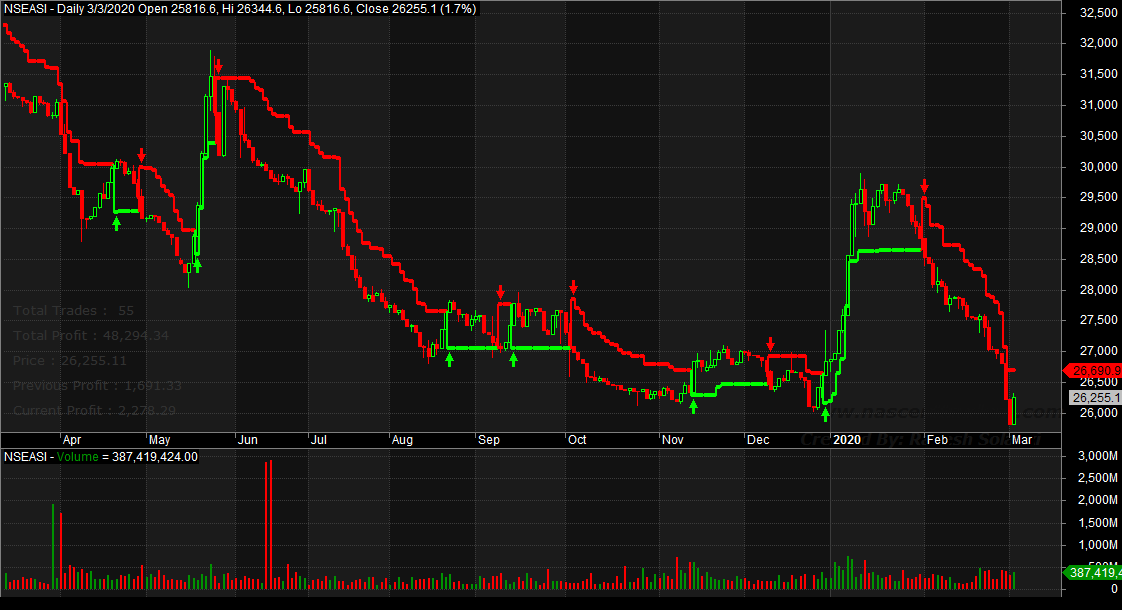 Trading on the Nigerian Stock Exchange on Tuesday had a very volatile session on improved buying interest to halt the seven successive days of decline as the composite index closed higher on a positive sentiment and very high traded volume.  As the market recorded it highest daily gain that is more than 1% since the last MPC meeting when the CRR was adjusted up by 500 points to curtail inflation.

As NSE rally in January and pullbacks in February were actually an indication what the rest of the year will look like, especially in an environment where regulatory risk, insecurity and inconsistent policy are on the rise, despite the seeming economic recovery as shown by the positive GDP growth of 2.27% against 1.94% in 2018 and February PMI that stood at 58.3 point from January position of 59.2 points.

A technical indicator that track records of projection is 69% correct and when it is wrong, anything more than a 5% more, again the January high typically means higher prices to come. As  at the end of February, NSE Index was trading below January opening to close lower for the month, if it regains the loses soon, this suggests there will be more rally to come.

But looking, at the rate of  at which the market rebounded on Tuesday, in the midst of  recent S &P downgrade of the Nigeria outlook  from Stable to negative, CEO’s of stockbroking firms okaying NSE demutualisation to free dead capital that will impact  on the market, low price  attraction as audited account earnings season is ongoing. Also traders are already gaining confidence against the effect of CONVI-19. Even in China where the virus commenced, their capital market is already recovering, more so, news have it that, a vaccine had already been discovered in Israel to cure the strange virus. Back in Nigeria, the government had consistently proven to be in control.

The best thing to do now is put together a buy list. Chasing dividends is not a winning strategy in a bear market, except you are a long term investor because the companies could cut their payout and after share price adjustment for dividend prices will really go down.

We advise players to stick with the stocks and sectors that brought the rebound as recorded on Tuesday, however I only expect it to be a trading environment. That’s fine for me however because yesterday the market was up almost 2% in just one day.

Meanwhile, Tuesday’s trading started on the upside and it was sustained throughout the trading session despite its oscillation on market forces and buying interest that pushed the NSE index above the psychological line of 26,000 level to intraday high of 26,344.55 basis points, from its low of 25,816.56bps. Thereafter, it finished the day higher at 26,255.11bps.

Market technicals for the session were positive and strong, with higher traded volume than the previous session in the midst of postive breadth and high buying pressure as revealed by Investdata’s Sentiment Report showing 83% ‘buy’ volume and 17% sell position. The total transaction volume index stood at 1.35, as momentum behind the day’s performance was seriously weak, despite moving up as Money Flow Index reads 8.84points, from the previous day 3.19points, an indication that funds entered the market despite the prevailing low in liquidity.

Attention: If you have not signed up for Investdata buy and sell signal setup, don’t delay. We have just added another risk management feature and new stocks of most revered traders and investors in corporate Nigeria to our watchlist. These stocks are with double potentials.

To become a member, send ‘YES’ or ‘STOCKS’ to the phone numbers below. Take advantage of this service to buy right and sell right at the current market recovery ahead of full-year earnings reporting season portfolio reshuffling and repositioning as we await an economic reform policy to stimulate and re-track the economy again.

The sectorial performance indexes were largely bullish, except for the NSE Industrial goods and Insurance that closed 4.27% and 1.57% lower, while the NSE Banking  index led the advancers, after gaining  7.99%, followed by the NSE Consumer Goods with 1,87%, as NSE  Oil/Gas index was flat.

Market breadth was turned positive, with advancers  outnumbering decliners  in the ratio of 23:12, while market activity in terms of volume and value traded were mixed as volume was up by 18.12%  to 387.9 million shares from the previous  325.26 million units, while value of transaction drop by 21.23% to N5.08 billion from Monday position of N6.03 billon. This volume was driven by trades in FUGAZ.

We expect the trend to be sustained as funds may flow the way of stocks, dividend news, as more audited earnings hit the market in March. This is despite the likely continuation of the mixed intraday movement in the midst of profit-taking, with investors buying increasing positions in high dividend-paying stocks ahead of dividend declaration. This is also against the backdrop of the fact that the capital wave in the financial market may persist in the midst of relatively low-interest rates in the money market, high inflation and unstable economic outlook for 2020.

Also, investors and traders are positioning in anticipation of the 2019 full-year earnings reports, amidst the changing sentiments in the hope of improved liquidity and positive economic indices which may reverse the current trend.

We see investors focusing on the upcoming full-year earnings season, targeting companies with strong potential to grow their dividend on the strength of their earnings capacity.

Again, the current undervalued state of the market offers investors opportunities to position for the short, medium and long-term, which is why investors should target fundamentally sound, and dividend-paying stocks for possible capital appreciation in the New Year.

This was noted in the 10 golden stocks and trading ideas for 2020, as discussed extensively during the Investdata 2020 Traders & Investors Summit held in Lagos.

Also, traders and investors need to change their strategies, because of the NSE’s pricing methodology, the CBN directives and their impact on the economy in the nearest future.

February 2, 2023 19
NGXASI Chalk 3.88% In January, But Volatility Ahead Amid Mixed Outlook, Price Corrections