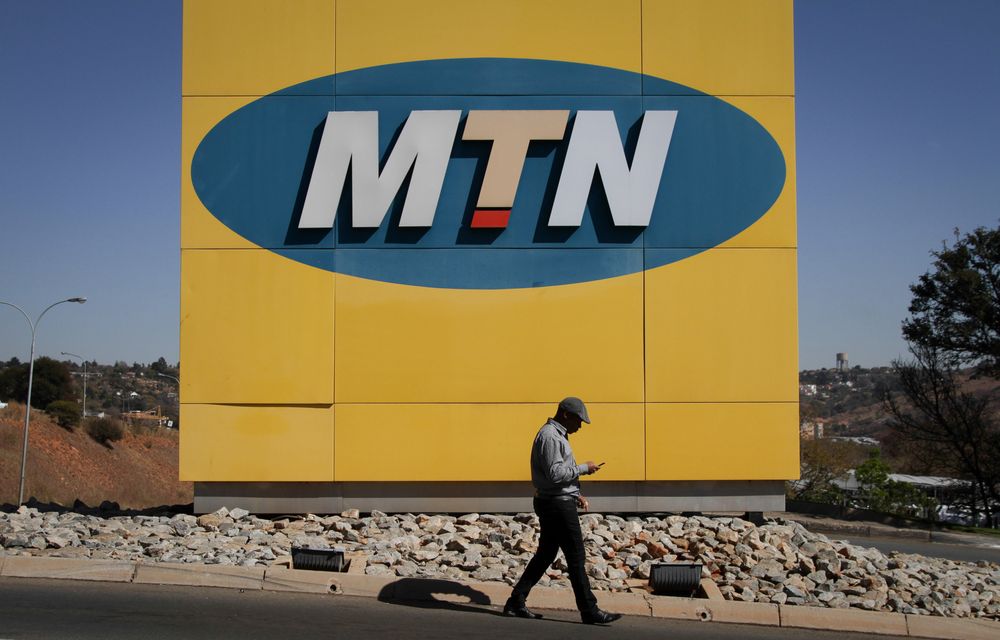 Key Financial Ratio
• This report is a review of the first full-year audited financials of MTN Nigeria as released by the management post-listing on the Nigerian Stock Exchange (NSE). We carefully compared the said report with similar figures posted in the corresponding year.
• For the purpose of this report, we have assumed that the listing price is the share price of MTNN shares in the 2018 business session.
• In summary, the result shows an average improvement in both top and bottom lines, along with reasonable adjustments in the liability indices. Meanwhile, ratio analysis shows a mixed performance as explained below.
• Complementing the previously released interim cash dividend of N2.95 per share, the management of MTN Nigeria further proposed a final cash dividend of N4.97 for the year ended, 31st December 2019.
• Closure date for the said dividend is 20th April, while the qualification and payment dates are respectively 17th April and 19th May respectively. 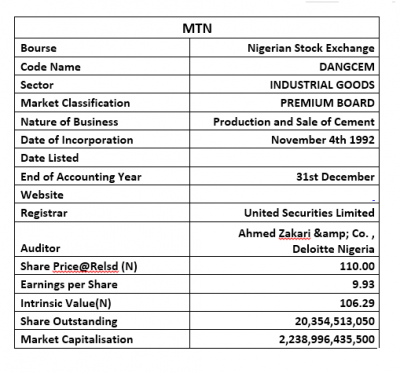 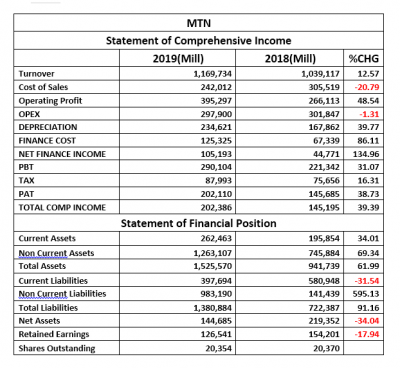 Statement of Financial Position
• Current Assets was valued at N262.46 billion at the end of the year under review, compared to N195.85 billion in the corresponding year.
• Non-Current Assets equally grew by 61.99% to N1.26 trillion, as against the N745.88 billion of the preceding year.
• Thus, MTN Nigeria’s Total Assets valuation improved from N941.73 billion, pre-listing on NSE to N1.52 trillion, the same as 61.99% growth within the two compared year.
• Current Liabilities dipped by 31.54% to N397.69 billion in the current year, whereas it was N580.94 billion in the corresponding period of last year.
• Thus, Total Liabilities grew by 91.16% over the comparable year, a faster growth when compared to the increased recorded on the assets.
• Net Assets dipped to N144.68 billion from the previously reported N219.35 billion at the end of the 2018 financial year.
• See the above table for details

Financial Strength/Solvency Ratio
• As noted above, MTN Nigeria’s Asset valuation is higher than the liabilities, thus, Debt Ratio is valued at 0.91x as against 0.77x in the corresponding year. This simply shows a reduction in the company’s financial strength within the two years compared, since this means the business may not be generating enough cash flow to service its debt
• We have estimated a Debt to Equity Ratio of 9.54x for MTN Nigeria, which is academically on the high side and signifies that the company used far more debt to finance assets through the year, over equity.
• Confirming the fact that the business used more debt as against equity, the estimated equity ratio stood very low at 0.09x. Technically, it can also guaranty investors’ safety in the business.
• Please understand that we did not estimate the Beta value since the company is newly listed on the floor of the exchange and has not generated enough data for the estimation of beta.

Profitability Ratio
• Pre-Tax Margin grew by 16.43% to 24.80%, as against N21.30% in the corresponding year.
• Cost of Sales is estimated at 20.69%, down from the previously estimated 29.40% in the comparable year. This shows the management control on the direct cost of running the business
• Confirming the effective use of debt through the year, the company achieved an outstanding and practically uncommon Return on Equity 139.69% through the year, this is even higher than the 66.42% recorded at the end of 2018 financial year
• See below for detailed profitability ratios.

Efficiency Ratios
• Confirming management efficiency, the Operating Expenses to Turnover ratio dipped by 12.33% to stand at N25.47% from 29.05%.
• Nevertheless, Turnover to Total Assets Ratio dropped by 30.51% to N76.68%, versus 110.34% in the comparable year.
• Working Capital Turnover of MTNN is negative; this is so since the Current Liabilities exceed current assets in the two financial years compared in this report.
• Working Capital Ratio estimated for MTNN is below the ideal measurement. Thus, it is an indication that it may not be able to effectively answer its current liabilities call with the current assets as and when due. This ratio is more useful for suppliers.

Investment Ratios
• The management of MTN earned N9.93 on each of its listed shares. This is a 38.84% improvement over the N7.15 earned at the end of the 2018 financial year.
• In the same trend, Total Comprehensive Income improved over comparable year by 39.50% as shown in the below table.
• P/E Ratio stood at 11.08x, as against the estimated 12.58x in the corresponding year.
• The Earnings is a yield of 9.03% on the price of MTNN as of the day this report was made available to the investing public, whereas, the final dividend yield is 4.52% of the price at released date.
• Meanwhile, the entire dividend paid during the year (N7.92) yielded 7.20% of the price of MTN on the floor of the exchange.
• Currently, MTNN has a very low Book Value compared to its current market price. We have estimated its Book Value at N7.11 versus N10.77 in the prior financial year.
• See below for other investment ratios.

Valuation
• Our blend of valuation tools fairly valued each unit of MTNN shares for N106.29, please understand that this valuation may change over time. This is because only a few numbers were available for projecting expected returns. Nevertheless, we rated the share of MTNN a Hold.