Introduction
• This report observes the recently released full-year financial numbers of Guaranty Trust Bank Plc for the year ended 31st December 2019 and compared the same with similar figures for the corresponding period of 2018 to establish growth and offer recommendations accordingly.
• Nevertheless, we have explored prior full-year numbers for projections and valuation purposes.
• We have therefore valued each unit of GTBank at N38.86, representing a marginal improvement over our nine-month valuation of N33.95 each.
• The result is considered as flattish when put side-by-side statistics for a similar period of the previous year, though all financial indices are slightly better than the prior year’s.
• See the table below for a detailed comparison of the released figures. 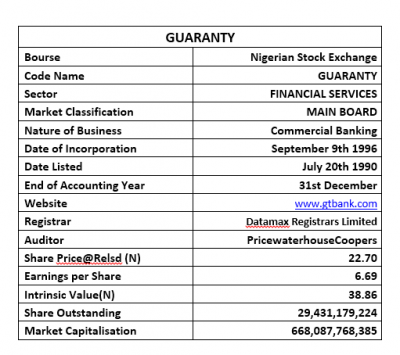 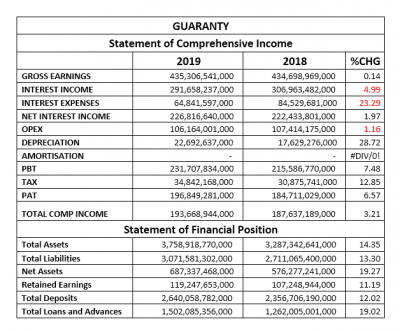 Dividend Details
• At the end of the 2019 financial year, the management of Guaranty Trust Bank proposed a final cash dividend of N2.50 per share.
• This is in addition to the previously paid interim dividend of N0.30, bringing total dividend paid through the 2019 financial year to N2.80 per share.
• Thus, the annual Pay-Out Ratio stood at 41.86% slightly below last year’s 43.82%.
• The final dividend yielded of the share price of Guaranty Trust Bank on the exchange as at the time the result was released was 11.01%. We, however, note that the share price dropped significantly towards the released date and has continued to nosedive, arising from the ongoing bear-run, else the yield will be lower.
• In the same trend, annual Dividend yield over the price of GTBank on the released date is the same as 12.33% against 7.25% last year.

Financial Strength/Solvency Ratios
• We have estimated the Debt Ratio at 0.82x, the same as in the prior year. In other words, Total Liabilities estimate for the period is the same as 82% of Total Assets valuation. Note that Total Deposits was added to the Liabilities figure used in the estimate.
• We also ascertained that the Total Debt for the period can replicate Equity 4.47x, a reduced position from the 4.70x replicate estimated of in 2018.
• Total Equity was estimated at 18% of the Asset Value at the end of the period, which is the same as last year.
• We have estimated a Beta value above the market Beta for Guaranty Trust Bank shares. Note that at 1.45 Beta value, it is below the 1.52 industry average.

Profitability Ratios
• Earnings before Interest, Depreciation, and Amortisation (EBITDA) margin at 65.32%, is a 4.80% growth over the previously estimated 62.33% in 2018.
• Pre-Tax Margin stood at 53.23%, up from the last estimate of 49.59% at the end of the 2018 business session.
• Interest Expense posted for the year is the same as 14.90% of the Estimated Gross Earnings figure; which is a drop from the previously estimated 19.45%.
• Return Achieved on Average Equity used through the year was estimated at 28.64%, which is below the 19.45% return achieved in 2018 numbers.
• See the table below for detailed profitability ratios and comparison.

Efficiency Ratios
• Operating Expenses is estimated to be 24.39% of the Gross Earnings Value estimate for the year, this is a marginal improvement when compared to the 24.71% from 2018 financial statistics.
• Similarly, Gross Earnings was estimated at 11.58% of Total Assets, representing a 12.42% drop in efficiency when compared to the estimate from the corresponding period of 2018.
• Total Loan to Deposit Ratio at the end of the year stood at 56.90% up from the 53.55% achieved in 2018. Please note that this is below the CBN requirement of 65% for all financial institutions in the country.

Investment/Valuation Ratios
• Profit on each unit of Guaranty Trust Bank at the end of the 2019 financial year is estimated at N6.69 as against the previously estimated N6.28 in the comparable year.
• Total Comprehensive Income per unit shares is also estimated at N6.58, versus N6.38 in the corresponding year of 2018.
• Price to Earnings Ratio is estimated for the year stood at 3.39x as against 6.05x in 2018.
• The said earnings per share is the same as 29.46% of the current market price of GTBank shares on the exchange when the result was released. This is a better yield than the previous year’s estimate.
• Note that the last-minute price drop is instrumental to the improvement seen in the yield.
• The current Book Value of Guaranty Trust Bank is N23.35, a 19.27% improvement on the N19.58 estimated last year.
• Confirming a seemingly under-priced position is the Price to Book Value ratio that stood clearly below unity.