Africa Prudential Plc recently released its full-year earnings report for the period ended December 31, 2017 to the Nigerian Stock Exchange (NSE), rekindling investors’ interest and confidence. It was also helped by the impressive dividend proposed on the strength of a significant improvement in performance, despite the country’s mixed economic situation, especially as the economy’s recession dragged until Q2 2017. The company has consistently remained among the early filers, despite releasing its numbers a bit late when compared to 2016 released date.
This impressive scorecard reflects a new Africa Prudential that is investment driven.
The company’s five-year strategic rolling plan and projection should guide long-term investors as the company’s management moves to take actions that will bring its forecast into reality as could become evident in the 2018 Q1 numbers expected in April. The company consolidated its solid quarterly performance driven by the management’s commitment to deliver value to clients and shareholders alike, regardless of the challenging business environment, despite the unstable financial market and economy that is driven by oil price.
Its aggressive product innovation and marketing, continues to be driven by a robust technology that helps to deliver satisfactory services in an efficient manner, while ensuring improved cost and risk management, a situation which reflected in the profit margin.
Turnover for the year was up by 39.14% to N3.37bn from N2.42bn in 2016, driven by the diversification strategy and earnings from transactions in its core service area as a leading registrar in the national capital market.
Within the period also, bottom line grew by 68.25% to N1.71bn from N1.02bn in 2016, which produced Earnings Per Share (EPS) of 86 kobo, up from the previous year’s 51 kobo. Also, regardless of the increase in Impairment charges on trading in financial assets, operating expenses as a result of expansion, new product development and finance charges that impacted negatively on its profit level for the period under consideration.
The uptrending earnings and surprises of the company’s fundamentals supported the 66.12% growth in price between the February 23, 2018 released date, to February 26, 2018.
The stock is currently selling at premium above its Book Value of N3.47 and Price to Earnings (P/E) ratio of 5.95x. Investors’ waiting period has therefore reduced, as a result of the improved earnings recorded by the company, while Retained Earnings for the period also improved by 29.71% to N4.89bn from N3.77bn in 2016. 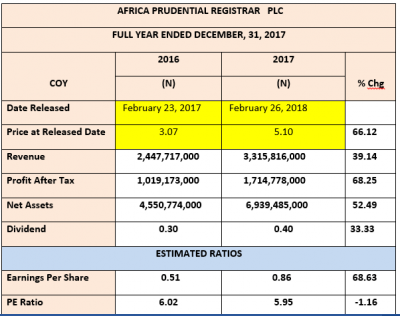 Valuation/Recommendations
African Prudential’s impressive numbers are a major point of attraction for investors and traders, despite the unstable global and domestic financial markets. Its 2017 numbers are indicative of where it would be at a time new businesses are already coming on stream for the new financial year.
Its current Book Value at N3.47 and Profit Margin of 51.72%, is the highest so far in the market today and signifies that the stock is fairly valued at the current market price on the strength of its P/E ratio of 5.95x, which is relatively okay; just as the Dividend Yield of 7.84% is attractive, irrespective of the current inflation rate in the country.
The consistent dividend payout by the company since 2013 is another point of attraction, as it reveals the potentials in the company and the nature of its services which is wealth creation, economic and business development. Based on this reality, we recommend BUY for medium and long-term investors. The company’s relatively small outstanding number of shares is a plus, even as 37.48% are in the hands of institutional investors. 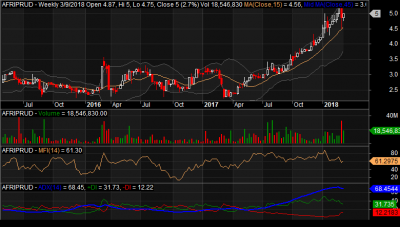 Africa Prudential in 2017 formed a rising channel that was trendy with different pullbacks that created buy opportunities within the channel but finally broke out its strong resistant level of N4.34 per unit to an all-time high of N5.20. Traders should watch out for pullback within the channel for new entrance as the trend line for continuation of the up-trend or reversal to first support level at N4.86 and second support price of N4.42 per share. The strength of the trend is strong as ADX is above 20 reading 68.45.

History
Africa Prudential Plc was listed on the exchange in 2013 to provide share registration service. The company is a technology–driven Capital Market Investment Mediator (CMIM) fully owned by the United Bank for Africa Plc before being quoted on the NSE. Its standard-delivery service for corporate organisations in the primary and secondary sectors of the capital market has always been its strong performance.
Its 31 years of share registration experience in the Nigerian Capital Market has afforded the company opportunities to participate in various offers, including Initial Public Offerings, Right Issues, Debentures, as well as corporate and government bonds. But recently diversify its business to generate more income.
Performance Analysis
Critically x-raying the company’s performance in the last five years post-listing on the Nigerian Stock Exchange (NSE) shows that performance had been unstable to reflect the changing economic situation that slowed down in 2016, but rebounded in 2017 with better numbers that supported the 33.33% dividend growth.
The company’s financials for the period under consideration reveals that the management has surpassed its forecast and projection four times in the last five years to point to where the company is going in 2018 and beyond.
Within the period, for example, African Prudential has consistent grown gross earnings and other performance indices, while turnover for the period grew by 79.46% to N3.32bn from N1.85bn in 2013.
Profit level for the period was up from N914.46m in 2013 to N1.71bn, representing 87.12% growth, yielding the highest profit after tax since 2013. This supports the commitment of management to grow earnings and manage cost as reflected in its profit margin for the review period that had been above all standard internationally and within.
Net assets on the other hand, currently stand at N6.94bn from N4.33bn in 2013, representing a five-year uptrend, despite the slight drop in 2016. The company’s dividend payment is a function of its improving earnings for a period, bringing a total dividend payout of N2.00 per share. Investors of the company who took position in the stock since then has recouped their investment from just dividends alone, without considering the capital appreciation.

Estimated Performance Ratios
Africa Prudential performance ratio for the period under review showed a mixed direction as the amount earned by investors and management were higher at 86 kobo from 46 kobo in 2013. This is a reflection of the strong earning power of the company in an unstable risk business environment but strengthen in 2017.
Price/Earnings Ratio remains fair and good at the current estimate of 5.95x, from its high of 7.37x in 2013. The last full-year EPS is a yield of just 16.81% of the market price as of the release date after recording a steady earnings yield growth from 13.57 percent in 2013 to the highest in 2015 at 27.95 percent. With recent dividend yield of 7.84 percent as at the price on released. The Book Value for same period were in the ranges of N2.17, N2.26, N2.29, N2.28 and high of N3.47 in 2017. Putting this ratio and the market price of the stock side-by-side indicates that opportunity beckons for short, medium and long term investors. The company’s profit margin over the years have improved as management effectively controlled cost to boost profit, suggesting that in every one naira income generated 52 kobo is a net income. 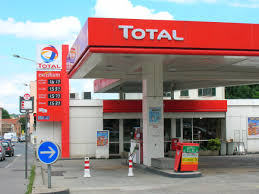 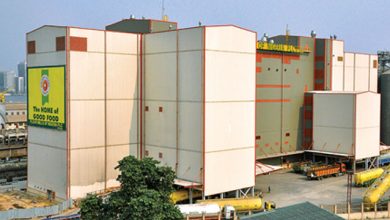